Why Would Creditors Settle for Less Than the Full Balance?

The average person is carrying so much debt that they just cannot keep up with the minimum payments due if any financial or other hardship hits!

What will a creditor do to collect or are they willing to settle for less than you owe?

It has been estimated that the average American is carrying over $30,000 of various "unsecured" credit card debt!

Missing a scheduled payment sets in motion a lot of things. 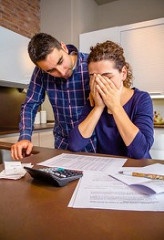 As the accounts become "past due", creditors can take several steps to collect:

If you have ever missed a payment or have fallen behind in making the required minimum payments for your credit card accounts, then you know that about 30 days after the missed payment, the calls and letters start!

The letter says basically that you must make a payment within a certain time frame or they may decide to take further actions to collect.

If you don't or can't catch up, then the calls start!  Not just a call now and then, but lots of calls.

Yes, there are ways to stop the calls, but while the account is still with the original creditor, they have a right to call.

Although there are laws that are supposed to protect consumers from annoying calls, most collectors ignore them and call via computer or "robo dialers" several times a day!

There are all kinds of estimates of how much debt is in the hands of debt collectors, but I think it has to be in the BILLIONS!

Once a creditor (Visa, Master Card, Discover, Capital One, Chase....) have tried to get you to catch up or start making payments again for about 3-4 months, they usually assign the account to a debt collector.

After dealing with debt collectors for about 17 years now, I've found that contrary to popular beliefs, most of them are professional and will try to help you take care of the debt.

However, there are always the exceptions!

They send letters and make calls (lots of calls), but now you can put a stop to the calls:

After a month or so of attempting the collect for their client (creditor) if there is not success, the account may be recalled and assigned to another collector.

This may go on for a few months or even a few years.

Depending on a lot of circumstances, the original creditor may decide to retain a Law Firm that specializes in debt collection.

The calls and letters start again and if there they cannot get you to pay the balance, then they may decide to start a LAWSUIT.

Here is a blog I've written that explains that process and will help you understand:

When there are Billions (if not Trillions) of dollars of debt out there, you can understand that there are companies that do nothing more that buy huge lots of debt that has not been collected for "pennies-on-the-dollar"!

Experian, Equifax and TransUnion are the top three credit reporting agencies and they sell debt (yes our information) to debt buyers all the time!

You thought they were in business to help you, well think again!

The "Big 3" collect information from all of us and SELL to lenders, companies running background checks on potential employees, insurance agencies and many more.

Once your account is SOLD, the owner has the right to collect.

Sure, they want to get as much as possible, but since they only spent say...$100 to buy an account balance of $5,000, they may be willing to negotiate the final balance due or a settlement.

Most people do not realize that at some point along the collection process a creditor, debt collector, law firms or debt buyer may be willing to accept less than the full balance.

This is called a SETTLEMENT.

Not every debt can be settled, but most can.

The debt settlement process is time consuming and frustrating for the average consumer, but can save you thousands of dollars and help you start fresh or even avoid bankruptcy.

Hope this has helped.