Three years ago we were facing bankruptcy.  We decided to use a Debt Settlement Company.  Now we are Debt Free, our Credit Score has improved and are in control of our financial lives again! 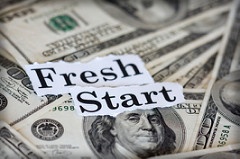 My story is probably much like anyone who has had to face the prospect of bankruptcy!

I had been employed with a fairly large company for about five years.  The pay was decent and although I can't say that I "loved" my job, I didn't "hate" it either.

Rumors had been circulating about a possible sale of the company to a larger competitor for about 6 months, but I was told "Don't worry, you'll be OK".

Well, one Friday afternoon, my supervisor called me into his office and let me know that the sale was going to happen and that the new company was going to close down my division.

Then I heard those dreaded words..."I'm really sorry, but we are going to have to let you go."

Talk about a shock!  All I could think of was...

My wife doesn't work because her net take-home pay would barely pay for day care, so why bother?

The company had some counselors available for job searches, etc., but after my session, I knew I was in trouble!

I signed up for unemployment and hoped that I'd find a job before the benefits ran out....wrong!

We had very little savings.  Well, I probably shouldn't call it a "savings account" because we really just transferred some money from checking just to keep it "out of reach" until an emergency came up.  Seems like those "emergencies" always came up!

At first, I wasn't really worried because I thought I would be able to find another job rather quickly.  Boy, was I wrong!

I sent out dozens of resumes and went on several interviews, but no luck.

We had used the "savings" up a couple of months ago when the hot water heater stopped working.  The plumber said that there was nothing he could do to repair it as it was just too old, had rust, and parts where very hard to find!

So, I used one of my credit cards to buy a new one and pay for the installation.

Even though the total was about $800, it really only increased my minimum monthly payment by $25 or so.

The unemployment finally ran out and I had to take a job at just a little over minimum wage.  It was better than nothing, but the final take home pay was just not enough to cover everything.

I was really beginning to stress out! 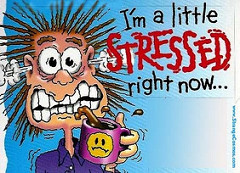 CREDIT CARDS TO THE RESCUE?

As time went by, I continued to not only send out resumes and work at my job, but the bills started piling up.

My wife and I decided to pay only the absolute essential bills like the mortgage, utilities, groceries, etc. and let the credit card bills, medical bills, and yes, even the car payment get behind.

As the total credit card debt was increasing due to late fees and over-the-limit fees, we had to use a CASH ADVANCE once in a while to pay a utility or grocery bill.

The crazy thing was, even though we hadn't made a payment in 3-4 months, we would still get an OFFER from a credit card company for another card or to make consolidate the others with a BALANCE TRANSFER.  We had three cards from one company!

Sure, this "rob Peter to pay Paul" action was holding them off, but we knew that a "day of reckoning was coming!" 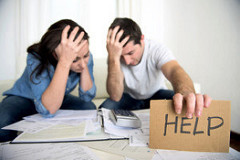 The total credit card and other unsecured debts was now so high that we knew we couldn't keep up.

It looked like BANKRUPTCY was our only option until we learned about DEBT SETTLEMENT.

We weighed our options and decided to give Debt Settlement a try and use Bankruptcy as our last resort!

At first, we tried to contact the debt collectors ourselves, but soon learned that they did not care about our situation and were unsympathetic and rude!

Even though they were willing to discount the total amount due, they wanted it all in lump sum by the end of the month!

Right.... We can't keep up with our payment now and yet we have two or three thousand dollars laying around to send them!

We did the normal "searches" online and soon found out that there were a lot of debt settlement companies out there!

Since they all seemed to offer the same services, we decided to narrow the field by using the following checks....

It was very evident that not debt settlement companies were the same!

They ranged from being very pushy, trying to rush us to make a decision, to those who seemed to have very inexperienced reps who obviously had not much experience with our problems.

We finally found a company that seemed to not only really know what they were doing, passed the criteria we mentioned above, but demonstrated empathy for us and our situation.

Once we enrolled, the first thing they did was to put a stop to those annoying and basically harassing calls from the collectors!

Even though one or two collectors still tried to call, our company contacted them and those calls stopped immediately.  It felt so good to not have to deal with those debt collectors any more!

As time went by, the monthly deposits we made to our reserve account began to grow.  At the same time, the debt settlement company was negotiating our accounts.

One by one, they accepted a settlement agreements that averaged around 50% or less that the current balance.

The total debt settlement program took a little over 3 years, but it was worth it.

Through the debt settlement program we accomplished our goals:

As I said before, debt settlement is not for everyone, but for us, it worked better than we expected and now we are DEBT FREE!